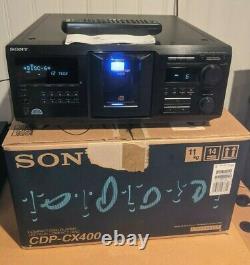 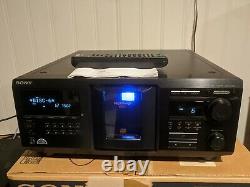 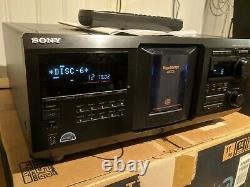 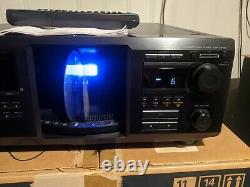 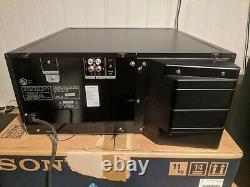 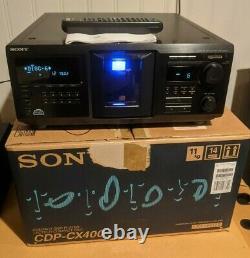 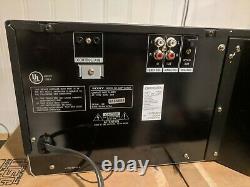 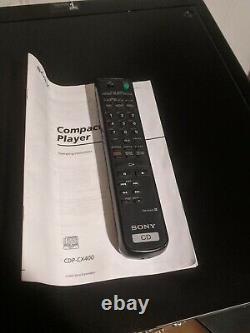 This sale is for a lightly-preowned Sony CDP-CX400 400-disc CD Changer w/ original box, manual and remote. Remote still has original Sony AA batteriesand the batteries still work though unclear for how much longer! Refer to the photos for cosmetics, and message me with any questions. Manufacturing date of this CDP-CX400 is September 2000. Additional Product details and information below.

There is a PS-2 (also called IBM type) input on the front panel of the player for a keyboard. Using a keyboard will make naming discs much faster. You can control a second Sony CD changer with this unit if it: (1) Has a control A1 (or Control A1II) Jack and (2) The command mode of the unit can be set to CD3 The 2nd Unit's RCA outputs are connected to the RCA inputs of this unit (marked 2ND CD) and the control 1 jack is connected between both units. When the CD players are connected in this way you can load the Disc Memos of the second CD player to this unit's memory if the second player has Disc Memo. You can label the discs of the second player using this unit or change the discs memos which you load from the second player.

When you do this you are using this player's memory, so you can not display them on the second CD player display. A total of up to 800 Disc Memos of up to 20 characters each may be loaded.

The controls of both units will function. When you press the play button on either unit the operating player stops and the resting player starts.

When players change the sound output of both players is mixed, with one player fading out and the other fading in. The player stores four types of custom file information for each disc. Disc Name: Label discs with names up to 20 characters. Delete Bank: Deletes unwanted tracks from CDs.

Group file: Group discs in up to eight groups. Each disc can only be in one group. Group files can be used in continuous, shuffle or repeat play. Each group can be given a group memo of up to 13 characters. Artist File: Classify discs according to an artist name. Are stored in the player's memory. If the player is not used for about one month you will lose custom file information. Custom files can be erased one at a time or all at once.

CD-Text information can not be replaced by a Disc memo file. Deleted tracks are skipped even in Shuffle play and program mode. All deleted tracks can be recovered simultaneously.

You can create up to three programs each of which can contain up to 32 steps (track or entire disc). When playing a CD with CD Text the display will show you the current disc title, artist name and track title if it is recorded on the CD. A CD-Text indicator lights up on the display whenever the player detects a CD with CD-Text information.

If the CD Text information is available in various languages, you can select the language that the information is displayed in. There is a jog dial on the unit for quick selection of discs and a second jog dial on the unit for track selection. When the player is turned off it will remember the last playing disc and the play mode. When the unit is turned on again it plays the same disc in the same mode. There is a control input for synchronized recording and auto function when used with compatible Sony components. Although this player can control a Sony CD Player with ControlA1, this unit cannot be correctly operated by a Sony CD player with Control A1. This unit can be controlled only by another unit with Control A1II. If you are using a ControlA1 CD player as a second player, this Unit should always be used as the Master. Allows you to quickly locate a disc by scanning disc names on the unit's display.

You can search for a disc by inputting the first character used in the Disc Name. By pressing the Easy Play button on the player the rotary tray will automatically move to the slot 1 position for easy insertion of a single disc. If the Easy Play button is pressed again it will start playing the disc in slot 1.

The player has a +100 disc key which allows you to skip 100 discs at a time for easier access when using the Jog Dial for disc selection. The player is compatible with an optional external audio timer. This will allow you to store up to 32 tracks which can be selected immediately. You can label the 32 tracks in your Hit List with up to 13 characters. CD Text CD tracks in the Hit List are stored automatically when placed in the Hit List. PS-2 (also called IBM type) input. Toslink Digital Output (with plastic cover).

The seller is "the_grand_acquisitor" and is located in Norwalk, Connecticut. This item can be shipped to United States.